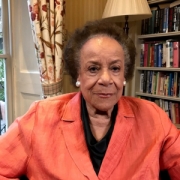 In a brand new series of 15 short films, the multi award-winning documentary series 1000 Londoners , the flagship project of Chocolate Films, discovers the lives of 4 generations of Londoners with Caribbean heritage.

Each of the films portrays the experiences of a single Londoner, including:

Alongside the short documentaries, you will see new edits of rarely-seen Super 8 footage from Brixton during the 1960s to 1980s, from former pentecostal Minister Clovis Salmon aka ‘Sam The Wheels’ who came to London from Jamaica in the 1950s; and of BFI archive from Notting Hill Carnival.

‘Windrush Generations’ is the 14th 1000 Londoners Movie Night. Previous movie nights have looked at themes as varied as food in London, women and London’s dog owners.

There are a series of screenings in London in November:

Both screenings will be followed by a short panel discussion about the legacy of the Windrush Generations, with Rachel Wang from Chocolate Films and several of the featured Londoners.