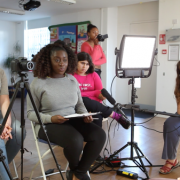 “When I started I expected it to be working with cameras, but I didn’t expect making such an interesting documentary,” says new filmmaker Marla Kellard-Jones. “I really enjoyed it. I enjoyed working with other women, it being kind of a female environment, which you don’t often get in filmmaking.”

The film was made on a filmmaking workshop at the St John’s Hill Community Centre in Wandsworth. Supported by Chocolate Films filmmakers, Ruth Gardiner and Emily Rimmer, the girls and women aged 12 to 50 set out to make a short film about a local woman. Contributor Yvette Vanson was totally up for it and she became much more than the subject of the film, getting involved in the project from sharing her experience during the filming to speaking at the closing event.

Over 5 days, the girls and women researched, shot and edited their very own short documentary. ‘Yvette Vanson, Londoner #280’ is part of 1000 Londoners, the most in-depth and expansive documentary series ever produced about the city.