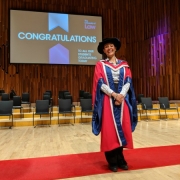 Chocolate Films Director Rachel Wang recently received an Honorary Doctorate from the University of Law as part of a Graduation Ceremony held for more than 900 students at the Barbican Centre in London.

Rachel is an alumna of The University of Law who, after completing her LPC and working in corporate finance for four years, decided to set up her own video production company, which she has grown into a highly-successful business. 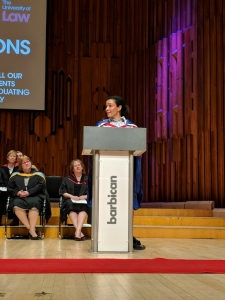 On receiving the Doctorate she said: “I’m extremely proud to be awarded an Honorary Doctorate by The University of Law. It’s such an honour.”

Rachel said she was working on many ongoing projects including creating AV for new exhibitions at the National Maritime Museum and the British Library, working on a longterm documentary project with New Covent Garden Market.

“We are about to shoot a documentary in Germany, Thailand, India and Poland. On the education side of the business, we’re creating series of online training films for a client in Germany. We’re also producing animations about security robots in Scotland, and the effects of skunk cannabis in London.” said Rachel.

Rachel told the new graduates to be brave and confident; “Your degree will open many doors, or if, like me, you want to start your own business, it will be a vital tool for the rest of your career.”