The impending Fairtrade Fortnight (27th February – 12th March) led me to reminisce that the Fairtrade movement inspired the roots of our own accreditation system, back in the late 2000’s. Fairtrade is a global movement to secure fair prices, working conditions and terms of trade for farmers, producers and workers across the world. By guaranteeing a minimum price and a premium payment, which producers invest into their businesses and communities, Fairtrade gives people in developing countries the opportunity to improve their lives and plan for their future.

The credibility of the Fairtrade system is upheld by FLOCERT, which is coincidentally a Social Enterprise Mark holder. FLOCERT is responsible for independently certifying Fairtrade products and awarding the internationally recognised Fairtrade Mark; an independent certification that you see on a product that meets the international Fairtrade standards. This label shows that the product has been certified to offer a better deal to the farmers and workers involved. The Mark helps consumers to easily identify products that have met the required standards. 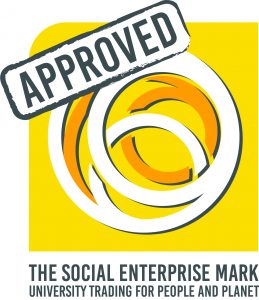 In very simple terms, the Social Enterprise Mark is the social enterprise equivalent of the Fairtrade Mark, providing a clear definition of what constitutes a social enterprise, and an instantly recognisable ‘stamp of approval’ to show that a business has been independently assessed and meets sector-agreed criteria to justifiably call itself a social enterprise.

With the Fairtrade Mark now well into its third decade, working with over 1,200 certified organisations worldwide, it is perhaps no surprise that 9/10 people now recognise and understand the label. Although, I am sure that maintaining and raising public and consumer awareness remains a key objective, hence the annual Fairtrade Fortnight campaign.

It has always been my wish that the Social Enterprise Mark will not only become as recognisable as the Fairtrade Mark, but that it will also stand for business that is striving to be really good at what it does, i.e. trading for people and planet. There are many challenges to this, as there are to any accreditation/labelling scheme, but it remains a key priority.

To this end, we are excited to be putting the finishing touches to a new campaign targeted directly at consumers, where we will be working in collaboration with several high profile partners. We hope that by working in partnership with other companies that share similar challenges of public perception and awareness that we can amplify our collective voice, to reach a wider audience across multiple sectors and demographics. We are planning to launch the campaign over the next few weeks and this will run into our conference in June, when we will consider the impact it has had in generating awareness and recognition.