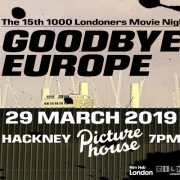 In the days that the UK leaves the EU, 1000 Londoners (a Chocolate Films project) invites the people of London to join ‘Goodbye Europe’ – a unique film screening created specifically for this historic moment in the capital.

‘Goodbye Europe’ is an anthology of new short films about the London lives of people from each of the 28 nations in the EU. It will show parts of the city that you may never have seen – profiling the rich and poor, the young and old, the integrated and the outsiders, from the West End all the way to the ends of the Tube lines. This will be a documentary experience like no other – a journey through the lives of European London, shot in the final months of the UK’s time in the EU.

Included in these 28 micro-documentaries are the stories of:

The films will take you inside a cage fight, an evangelical church and a rehearsal room at the Royal Ballet. They will show you the perspectives of a Bulgarian abseiler, a Swedish economist, a Spanish Big Issue vendor, a Finnish hairdresser and many many more.

The films will be edited along BFI footage from the 50s to today, curated by the archivists from London’s Screen Archives. Following each screening, we offer a panel discussion with filmmakers and contributors.

‘Goodbye Europe’ is the 15th and most ambitious 1000 Londoners Movie Night to date. 1000 Londoners was launched in 2014 to tell the epic social story of our city today through 1000 documentary portraits of Londoners.

See ‘Goodbye Europe’ at the National Portrait Gallery on 15th March, the Museum of London on 18th March, Ritzy Cinema on 27th March, Curzon Soho on 28 March and Hackney Picturehouse on 29th March.