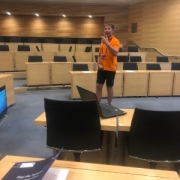 A student at the University of Northampton used his personal interest in strokes and stroke rehabilitation to win a place at a prestigious competition and talk about his own research.

Andy Ibbott – who has just finished the second year of his foundation degree in Sport and Exercise Science at Northampton – suffered a near fatal stroke in 2011 during a hospital operation, which left him needing to re-learn how to walk. He was also left with the condition aphasia, which makes it difficult for him to understand or produce speech.

The ‘Map the System’ competition is an initiative of the Skoll Centre for Social Entrepreneurship at Saïd Business School, University of Oxford and other leading higher education institutions. Students and educators who take part are tasked with thinking differently about social and environmental change by researching an issue and communicating their findings to an audience.

Andy competed against the likes of Harvard University students as he explored aphasia. His research sees a possible benefit to the reclassification of this condition as a brain injury, potentially combining resources and making access to support easier. He was one of only four representatives from UK universities, out of 20 total entrants, and although he did not win, he has already started further research to compete again next year.

Andy said: “Presenting my research in front of guests from universities like Harvard was a bit daunting at first, but the experience as a whole was powerful and inspiring.

“I’ve fully embraced the Changemaker philosophy at University of Northampton but don’t see myself as ‘only’ a poster child for stroke recovery and I look very much toward the future. But if getting out on the road talking about aphasia helps push for better support, I’m more than happy to do it.”

Andy received one to one coaching from Julia Jolley – Community Engagement Adviser in University of Northampton’s Changemaker Hub – to support his application and was supported at the competition by Bruce Paterson, Credit Union Officer at the University. The Changemaker Hub works with students before, during and after their studies to develop and enhance employability. Map the System will be built into the University’s student offer next year.

Andy’s efforts getting back into full-time employment were featured in the BBC TV programme Employable Me in 2017, and he has gone on to give motivational speeches around the UK and Europe, which have assisted with his speech and communication rehab.

Five years ago, Andy had a stroke. Since then, he’s applied for over 3,000 jobs… but has only been offered ONE interview. #EmployableMe pic.twitter.com/LBsbg3UQWm