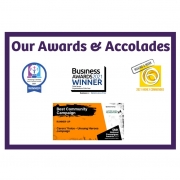 Forward Carers, a West Midlands based Carer and family support organisation, has recently had their good work recognised with several awards and accolades.

As well as being Highly Commended by the judges in our Making a Mark competion, Forward Carers also scooped two awards in recent weeks and were named a runner-up in another:

To find out more, visit the Forward Carers website.

The role of accreditation in
the Post-Covid world