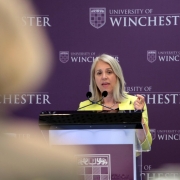 The University of Winchester contributes over £266 million a year to the regional business community, according to a new report launched this week.

The report was unveiled at an event held at the University on Wednesday 13th June featuring speeches from the Vice-Chancellor, Professor Joy Carter CBE, DL; George McFarlane, CBI (Confederation of Business and Industry) Sector Development Director, on regional development and the role of universities; and Tali Atvars, Winchester Student Union President, on the positive impact made by students.

Professor Carter said: “As a key pillar in the city and county, the University of Winchester creates value in many ways, economically, culturally and socially. We put our students on the path to success, helping them increase their employability and go on to make a difference in the world. We support a range of employment sectors in our region, and supply employers with the skilled workers they need to make their businesses more productive.

The expenditure of the University, along with the spending of its staff and students, further supports the regional economy through the output and employment generated by regional suppliers. The fact that learning makes a difference on the regional economy is well known, but this report quantifies the monetary values of our impacts.”

An inequality crisis – how do we spread the wealth?